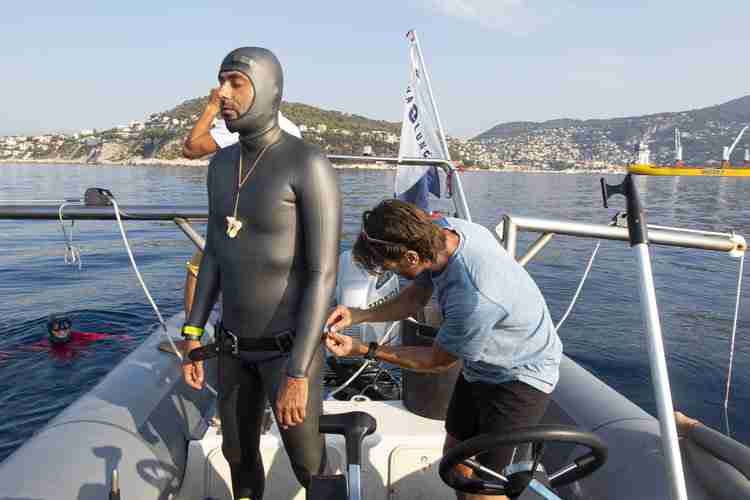 Systematic work with apnea divers is becoming very important. Dr. McKnight has been working together with Professor Erika Schagatay and Professor Eric Mulder with the aim of comparing the brain during freediving depth of the seals to elite apnea divers, as part of a great project of the Mid Sweden University. The world’s best deep apnea diver can plunge up to 130 meters of depth (current world record) with a single breath of air and return to the surface. The handling of these scuba divers is fascinating and gives much to study.

In order to be able to study them, Artinis Medical Systems manufactured a sensor based on the design of PortaSeal (a seal study) called PortaDiver. The PortaDiver was adapted by the SMRU to adapt to a waterproof casing and can now be turned on and controlled with magnetic switches. They have demonstrated that it acts in depth pressures equivalent to 100 m, and it is worth saying that they are experimental studies.

The sensor was further reduced in size and weight, to make it as light and soft as possible for scuba divers. In addition, the device can save the data into the internal memory, and then it can be downloaded by bluetooth once the dive has finished. In the pictures you can see the sensor on Miguel Lozano’s and Alexey Molchanov’s foreheads with the control unit on the back of the diver’s head.

Apnea divers want to achieve a predefined depth under water with a single breath of air, guided by a vertical line. During the first part of the dive, we actively swim towards depth. The PortaDiver team was tested at a depth of 100 meters where the diver turns and returns upwards, keeping the breath. The research team of Mid Sweden University under the supervision of Prof. Erika Schagatay has been working with the apnea divers for several decades. The group is currently working with the world’s top divers, including Alexey Molchanov and Miguel Lozano.

The PortaDiver allows to know the capacity to remain without human breath and, moreover, the highest tolerance to the hypoxia. The cellular respiration leads to the desaturation of the arterial blood, which can cause the diver to lose consciousness, called syncope, when the brain is left without oxygen.

In this case, these recent studies (not yet published by Schagatay and Mulder) can bring us important data on the organic functioning of the organism in active depth apnea.